As a company, our ambition and our approach are not only evident in the added value provided by our high-performance products, but also in our commitment to social issues and the effective support we provide to projects in this area. We take this commitment seriously. We enjoy doing good works and we also enjoy talking about them, because we are always on the lookout for partners to support our projects, our approach and our commitments beyond our core business activities.

Trott-war provides an opportunity for people in need to find their way back into society.
Giving people back their dignity is the goal of the Stuttgart street newspaper Trott-war, which empowers homeless people in Stuttgart to produce their own monthly newspaper and sell it at specific places around the city. Trott-war offers them work, self-confidence and prospects. By selling newspapers, nearly one hundred socially disadvantaged individuals are re-entering the working world and easing their way back into social life. Helping people help themselves, with long-term prospects!

The Trott-war Association was founded in 1994 by committed journalists and private citizens.

Trott-war follows two core principles. The street newspaper offers the homeless a platform for their issues and concerns, and newspaper sales provide them with an additional or even a primary source of income.
The participation of those affected by homelessness is a key pillar of the work of the street newspaper, as this gives them back responsibility for their own lives and empowers them to make their own decisions in the future. 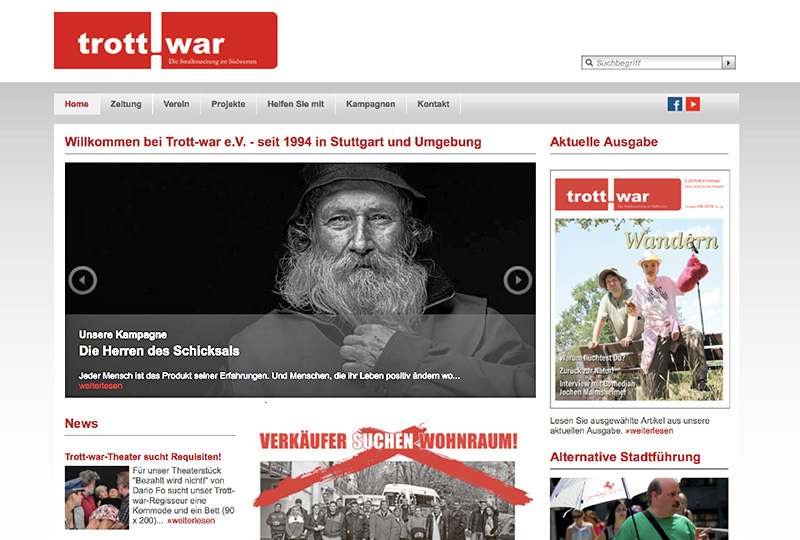